From March 1-19, Valencia converts into the scene of one of Spain’s biggest festival: Las Fallas Festival in Valencia! The streets of Valencia (Spain’s third biggest city) will be packed with giant handmade statues, fireworks and firecrackers. This centuries-old tradition is a uniquely Valencia tradition. The word “Fallas” originally referred to torches that people used to light the city. The word fits perfectly because fire plays a key role in the festival.

The origins of the Festival 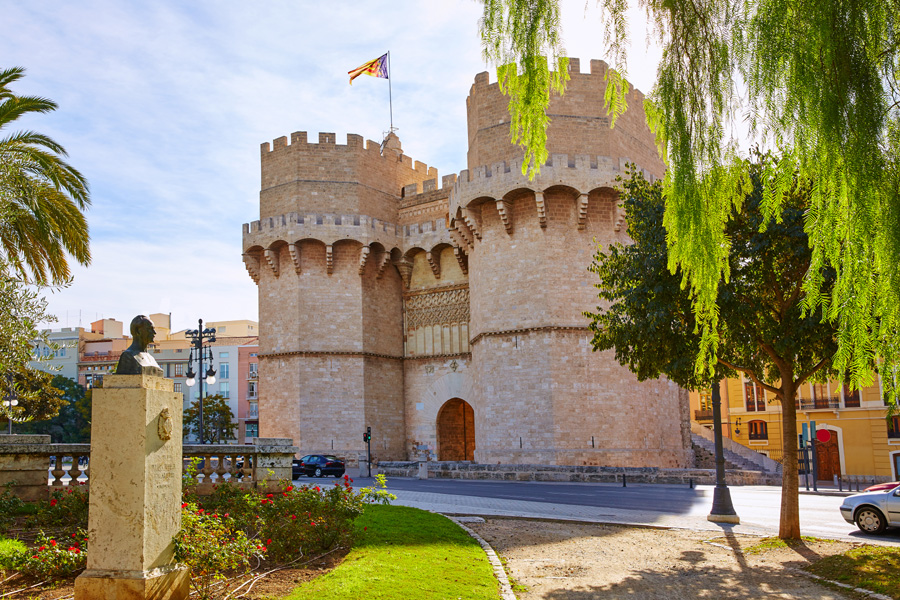 When exactly the festival began is a mystery. The popular legend says that it started with the carpenters guild. As winter ended and the days got longer, the carpenters gathered the leftover wood and the “parots” (wooden candle holders) that they no longer needed. Then they burned it all in celebration of St. Joseph, the patron saint of carpenters. The festival’s grand finale take place on March 19, St. Joseph’s Day. Whatever the real origin, the festival now attracts over a million people to the region every year. The festival kicks off with “La Crida” – The call.  The Serrano Towers traditionally hosts the event as one of the most recognizable monuments of the city. Fireworks and music get the crowd ready. Then the “Fallera Mayor” (Festival Queen) officially invites everyone to the party. 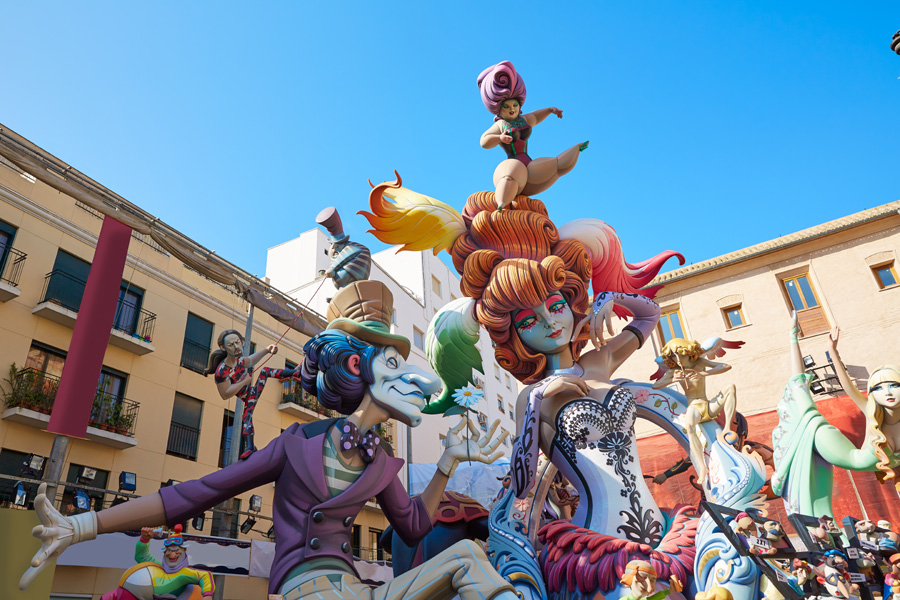 Over the years these burnings have evolved. From a few small groups to over 700 figures that are created every year, the “cremà” has grown into a full time business. Groups spend all year preparing their giant handmade “ninots” (giant dolls in English). At the beginning of the festival, all the ninots parade through the streets. The artists who work on the ninots often incorporate humor and current events into the caricatures they create. The “plantà”, or planting of the ninots, refers to finishing touches, marks the official start of the street displays. This happens on March 15. At the end of the festival, on March 19, all of the ninots are burned. The people vote for one Ninot to escape the flames. The most popular ninot ever year receives a “pardon” and the Fallas Museum stores the collection from past years.

Every day from March 15-19 the city hall offers an amazing fireworks display. However, the biggest show is reserved for the night of March 18. For 20 minutes the “Nit del Foc” (Night of Fire) mesmerizes the crowds in the streets.

But if you are looking for something different (and very noisy!) you have to witness, at least once in your life, “la mascletà“. Every day, at 2:00 PM everybody gathers around  the Town Hall square and awaits impatienlly for this show of noise, smoke and color to start! 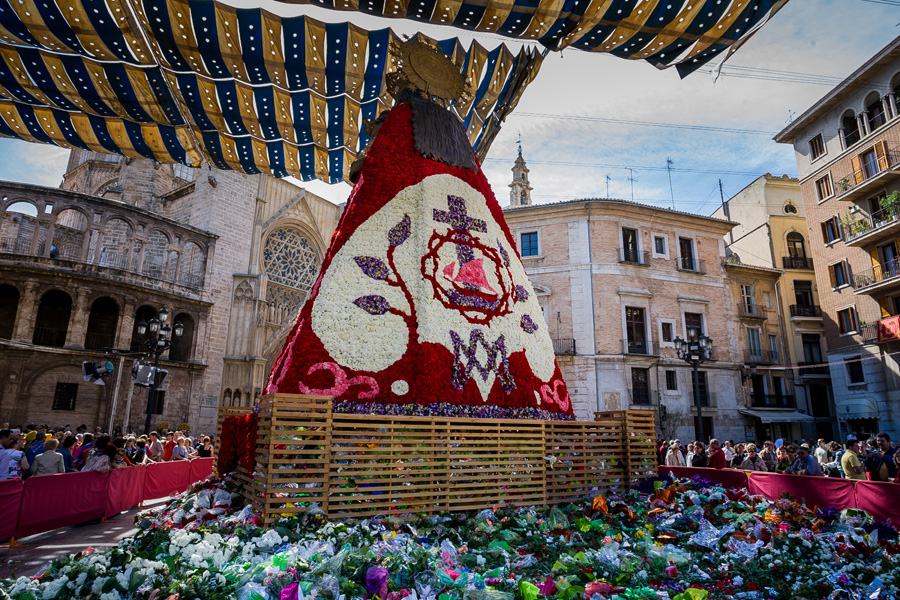 In addition to the ninots and fireworks, don’t miss the “Ofrenda”, the flower offering. Every team that creates a ninot offers flowers to the city´s patron saint, the Virgin of the Forsaken. The statue stands in the center of the square in front of the Basilica dedicated to her.  Once she takes  up her place, thousands of people come to pay homage with songs and flowers. Also, the “falleros” and “falleras” dress in traditional costumes. Because the outflow of flowers and dedications to the virgin is so important, the event now takes places over two days. Without doubt it is one of the absolute highlights of the Las Fallas festival. 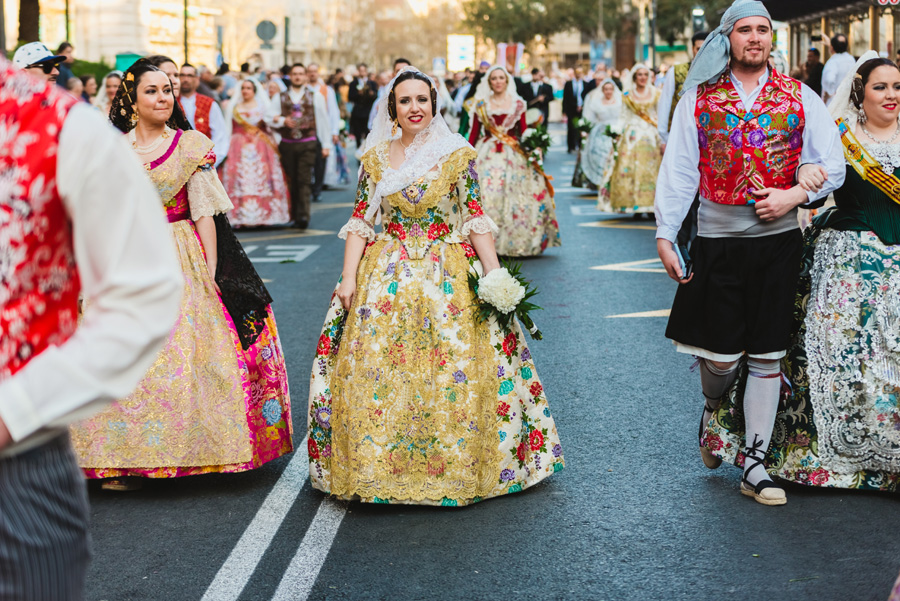 Aside from visiting the ninots, there is always something going on in the city. The streets light up like Christmas. Traditional dance contests, paella competitions, parades and concerts are a few things to try. Furthermore, these events often give you an even better feeling for the mood of the city. Don´t miss the “Cabalgata dels Ninots”, a satirical parade. No subject is off limits and no politician is safe during Las Fallas Festival!

In conclusion, Las Fallas festival represents Valencia in all its glory. For anyone traveling to Spain in March, check out Las Fallas to delve into Valencia’s culture and biggest festival.